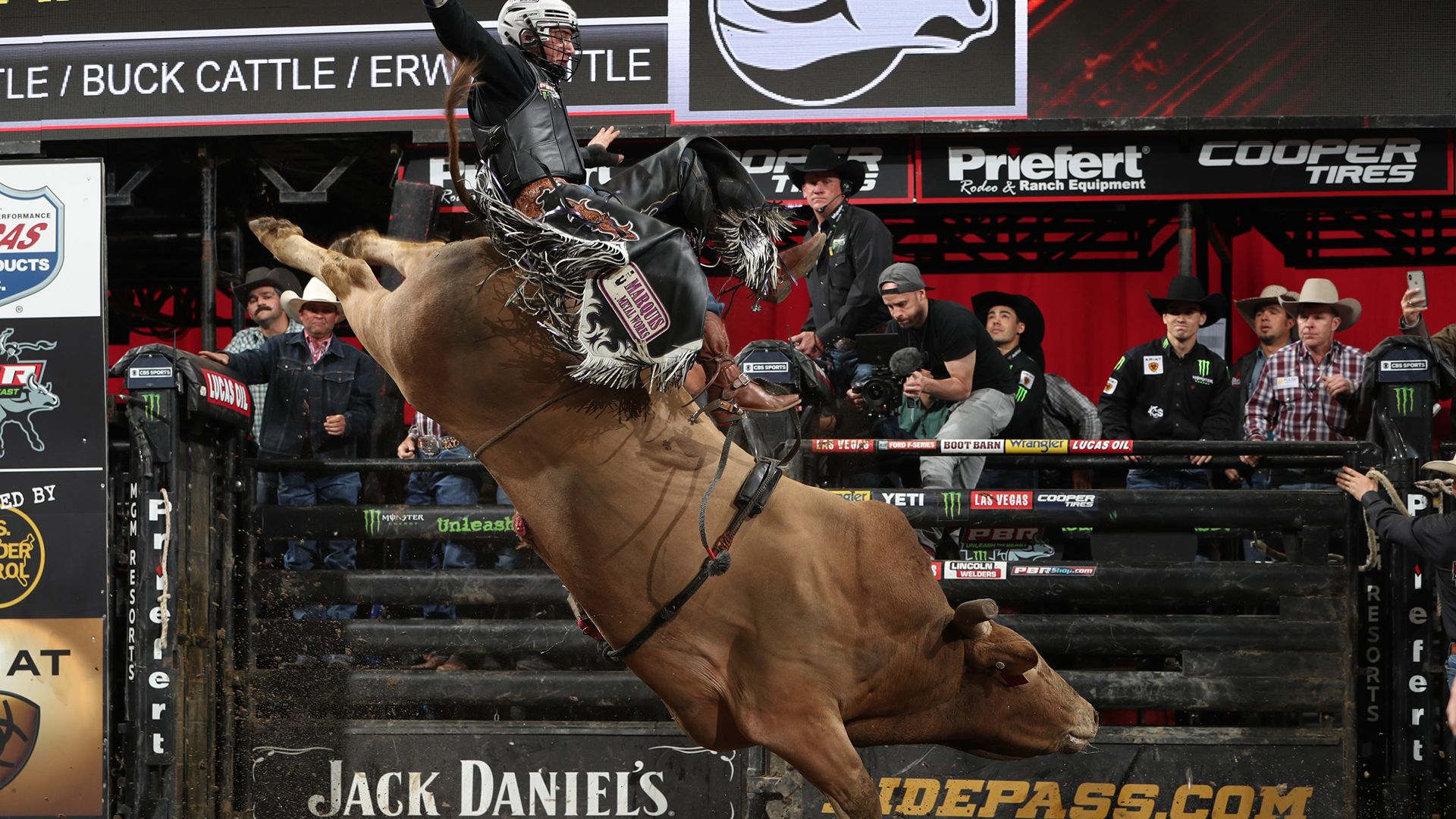 COLUMBUS, Ohio – Heartbreak Kid continues to embarrass cowboy after cowboy on the Unleash The Beast, and the D&H Cattle Company bovine athlete proved once again on Saturday night that it is going to take a heroic effort to finally conquer him.

All it took was one heavy jump from Heartbreak Kid before Mason Taylor was sailing through the air in 1.82 seconds, waving his arms in search of a safe land, during the 15/15 Bucking Battle at the Wrangler Long Live Cowboys Classic, presented by Cooper Tires, in Columbus.

“He is a bucker,” H.D. Page said with a grin. “That first jump. He is a big, rank sucker. He follows with that kick. Not many have that kind of ability.”

The 19-year-old knew he missed an opportunity to become the first to conquer Heartbreak Kid.

“I fell off,” Taylor said in disappointment. “I really don’t want him again, but yeah, I would get on him.”

Taylor is not alone when it comes to being put on blast by Heartbreak Kid.

It was only two weeks ago that world leader Jose Vitor Leme was sent flying in similar fashion in 1.69 seconds.

“I think the last two trips he should have been 47,” Page said. “I don’t know what else you have to ask one to do.”

“This is one of those monsters I was talking about earlier,” McBride said. “This is about as rank of a bull. That is the definition of it. He is hard to ride. You never know what he is going to do. He has all of the kick, the drop, the changeup. That bull’s got it all.”

Heartbreak Kid was marked 45.25 points to finish tied with Frequent Flyer (3.83 seconds, Stetson Lawrence) and Smooth Operator (92.5 points, Leme) for the third-highest bull score in the 15/15 Bucking Battle. SweetPro’s Bruiser was the top bull of the night with a 45.75-point score for bucking off Chase Outlaw in 7.43 seconds, while Fearless took home second-place with 45.5 points (7.83 seconds, Cody Teel).

Fearless moved ahead of Smooth Operator in the World Champion Bull standings with his 45.41-point bull average. He is also unridden and is 17-0 on the premier series.

“The thing with that bull is he don’t have a mean bone in his body,” Page said. “When they buck off at the wrong time, he is headed to the pen.”

Heartbreak Kid is sitting 13th in the World Champion Bull race with a 44.22-point average on eight outs, but Page believes that Heartbreak Kid’s last two outs with Taylor and Leme are evidence that maybe he can eventually make himself a 2019 contender.

“If he bucks like that, yeah,” Page said. “He has days where he is not that good. The trick to getting them good bulls to buck consistently is staying out of there way. I am trying not to do anything tricky or fancy. They know what they need to do.”

K-Bar-C Bucking Bull’s Bad Touch is 31-0 on the premier series and will look to match Heartbreak Kid with another buckoff Sunday in the championship round.

According to Dr. Tandy Freeman, Cravens was transported to a local hospital to be evaluated for liver/kidney injuries sustained during Round 1 when he was stepped on by Mama’s Bad Pet (4.34 seconds).