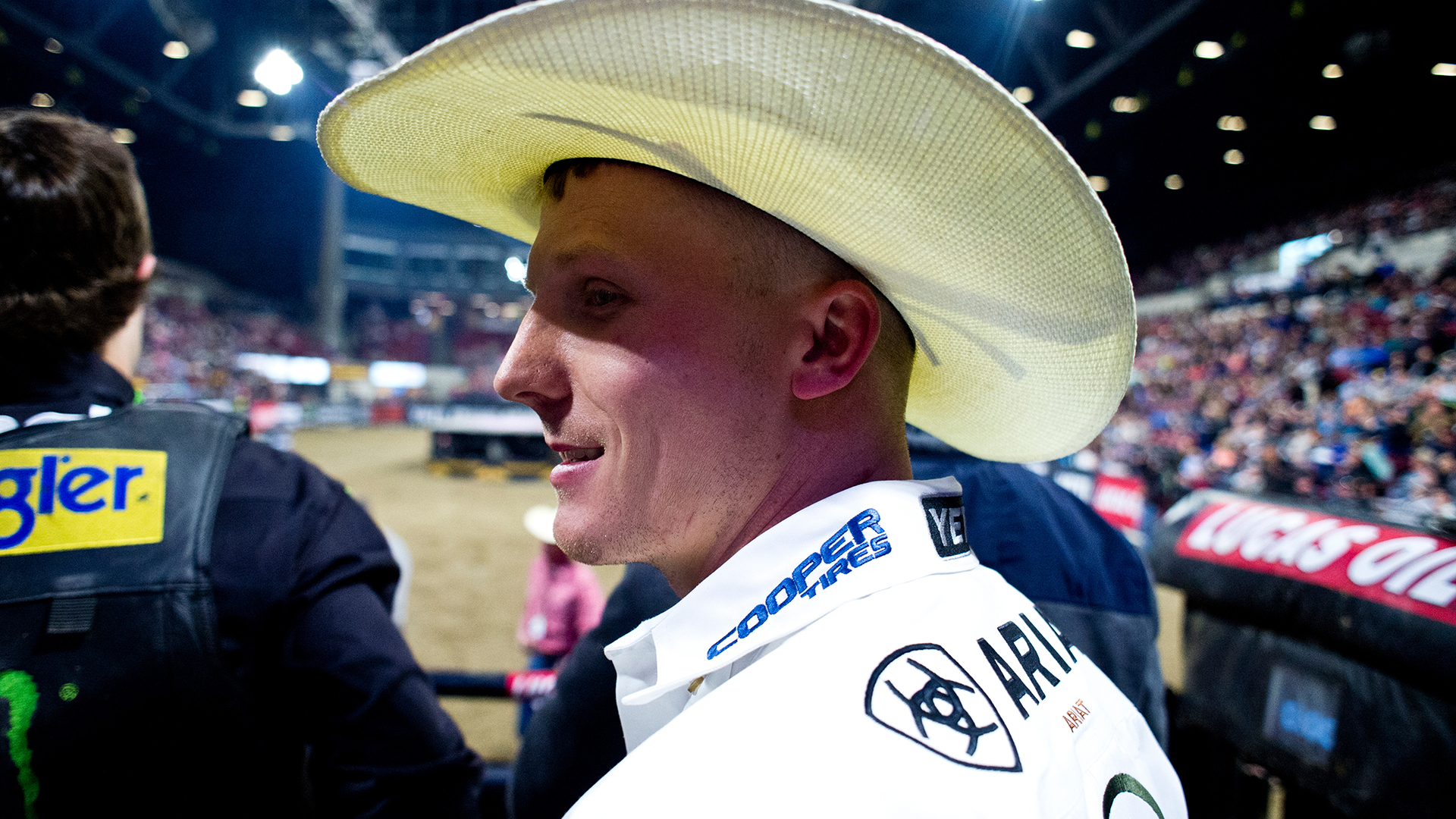 PUEBLO, Colo. – Cooper Davis proved in 2016 that he can fight through an injury when the time is right.

Davis returned to competition only 17 days after surgery to repair a broken collarbone on September 14, 2016, and eventually went on to win the World Championship.

However, the 25-year-old believes there is a time and place to when he needs to push his body to chase a world title.

That time is not in the first half.

“At the end of the season, maybe you have to ride through some of that stuff, but at the beginning of it, you might as well set yourself up to be healthy and to be successful at the end of the year,” Davis told PBR.com on Tuesday.

“That is my deal. When I go, I want to be 100%. I have more to look after than just me. I don’t want to be selfish in the aspect of it is a dangerous sport anyways. I want to be 100% every time I show up. Every other athlete in every other sport, they take care of their bodies a whole lot better than we do. Granted they have a salary, but at the same time, if we are ever going to get to that part in our sport we have to start treating ourselves the same way.”

Davis’ nagging injury to his riding hand has kept him out of four Unleash The Beast events this season, but he is still ranked No. 9 in the world standings.

In fact, he competed in only one more event at this point of the season last year.

“It is pretty simple for me,” he said. “If I am off a weekend, rather than going to beat up my body or my mind when it is not there, it is easy for me to come back and feel confident that I can go and win when I am there.

“That is my main philosophy. Rather than fight an injury all year long and try to play tough about it. For me, it is smarter long term and just for the year. You go get beat and banged up and you don’t do very good, then it don’t matter anyway.”

The fifth-year pro knows he has work to do, and he will look to get things started against Show Me Homie (18-5, UTB) in Round 1.

Show Me Homie bucked Davis off in 2.54 seconds earlier this season in Duluth, Georgia.

“That is the main focus right now, staying on what I got,” Davis said. “Not necessarily having a win, but that would be a significant goal. But if I can go stay on my bulls and feel confident going into the break, that is where I want to be at leaving Green Bay.”

Two-time World Champion J.B. Mauney’s pursuit of career ride No. 526 will have to wait until Last Cowboy Standing at Cheyenne Frontier Days on July 22-23.

Mauney has decided to sit out Green Bay to let his rib injuries from Albuquerque, New Mexico, heal.

The 32-year-old separated some ribs and broke another when he was bucked off by Monkey in Round 1. He then attempted to ride in Round 2 before Cool Customer yanked him forward inside the bucking chutes, forcing Mauney to doctor out of the round.

“Still pretty sore,” Mauney said via text message on Tuesday. “Just letting (them heal). The broke ones aren’t that bad. The separated ones are.”

Jesse informed PBR.com that he will have to undergo surgery after he dislocated his right shoulder during his 88.25-point ride on Total Feed’s Bushwacked. He is hopeful he can return in time for the 2019 PBR World Finals in November, but that may be stretch.

Stetson Lawrence has replaced Jesse for his Bismarck team with No. 8 Ryan Dirteater.

World leader Jose Vitor Leme saw his lead atop the world standings shrink a tad with Chase Outlaw (55) and Jess Lockwood (50) picking up some points during the Memorial Day Weekend.

Regardless, Leme still has a 434.16-point lead in the standings over Outlaw, the No. 2 bull rider in the world, courtesy of his victory at the Ty Murray Invitational two weeks ago.

Leme has ridden six of his last 10 bulls.

LOCKWOOD GETS BENEFICIAL REMATCH IN ROUND 1

Lockwood has been a man on a mission since returning from his broken left collarbone.

The No. 4 rider in the world standings won the 15/15 Bucking Battle in Albuquerque, New Mexico, with his 91.25-point ride on Bad Decisions and split the Round 1 win with an 89.5-point ride on Legit.

He then finished 3-for-4 at the Shipshewana, Indiana, Touring Pro Division event last weekend.

Now, Lockwood will begin Green Bay with a rematch against Stunt Man Ray, who he rode for 89.5 points in Oklahoma City in January.