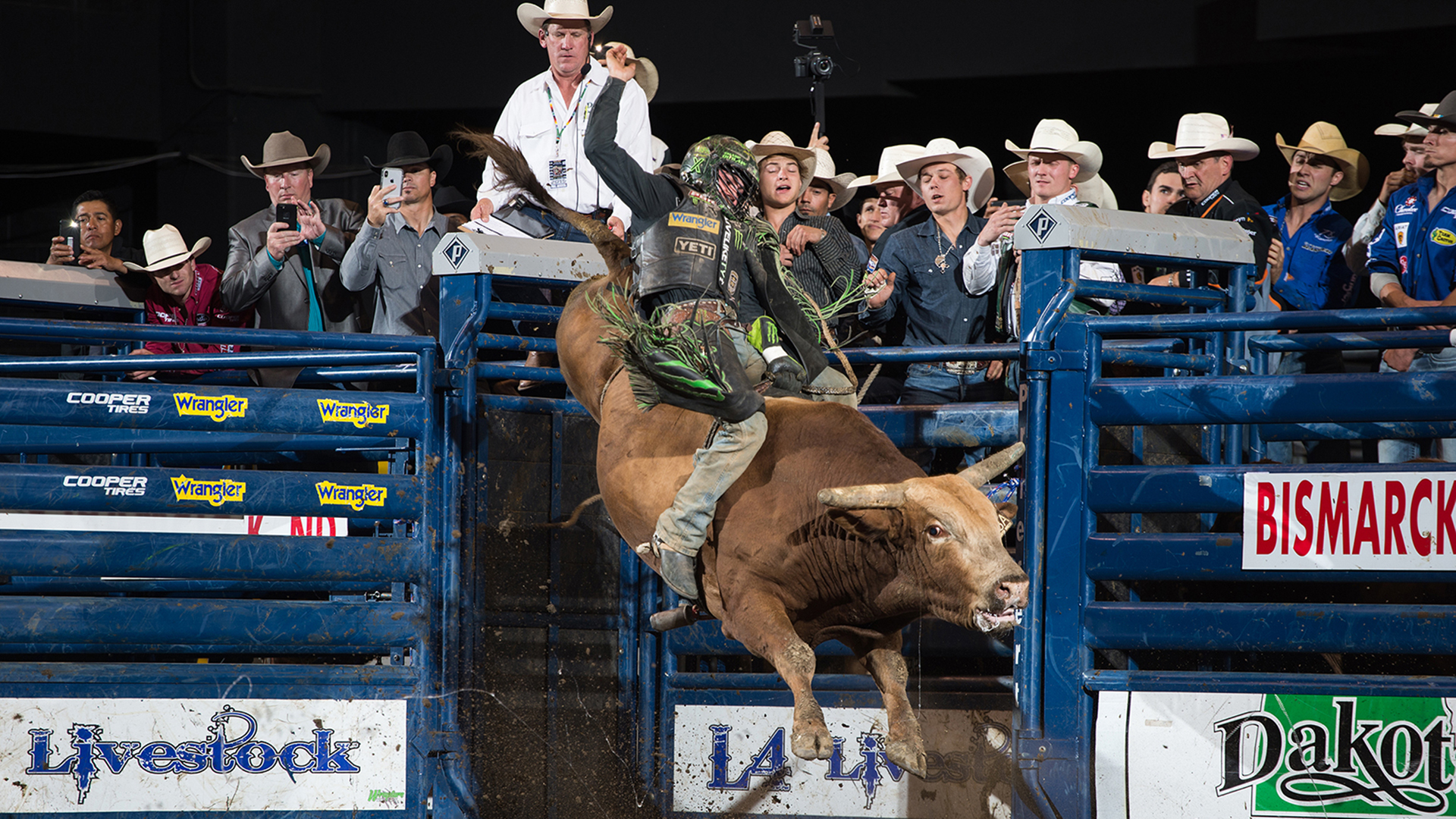 Re-live the excitement from Bismarck exclusively on RidePass on-demand!

BISMARCK, N.D. – “This is incredible. I am so honored to be a part of this” – Lucas Divino.

Sage Kimzey – “I’ve never been to a bull riding with more legit 90-plus bull rides.”

“It’s the best bull riding I’ve ever seen or been to in my life,” – Cannon Cravens

Cody Teel – “I wanted to make a statement ride. Honestly, I expected something special with all the matchups and the guys tonight.”

“This is something you dream of and something I will remember forever,” – Derek Kolbaba

“To see my buddies and boys fired up like that and blow off the roof, shit, that just gets your (freaking) motor running,” – Chase Outlaw.

Stetson Lawrence – “I was amped up. I just wanted to do my best part and have fun just like those guys.”

“I’ve never been to an event like this. It was a great event, great bull riders, the best bulls. Perfect combo.” – Jose Vitor Leme.

This group of eight riders, some teammates and some foes that were competing in Chad Berger’s $125,000 team challenge, presented by Marquis Metal Works, Saturday night will forever be held in the same breath when people look back on the exhibition bull riding held on June 15, 2019, at the Bismarck Event Center.

The event following Berger’s 19th annual Dakota Community Bank & Trust Touring Pro Division event produced one of the most memorable nights in bull riding history, especially for the eight riders that reached the 90-point threshold and the other 40 riders that competed earlier in the night watching the magic unfold in front of their eyes.

This was their moment.

This was their “Greatest Night of Bull Riding,” when 11 riders went for over 90 points during Round 2 of the 1999 PBR World Finals.

Seeing Chase Outlaw ride Smooth Wreck for 94.75 points was their version of Gilbert Carrillo riding Perfect Storm for 96 points in arguably one of the greatest championship rounds in PBR history during the 2001 St. Louis premier series event. It was during that round when five riders went for 90 or more and Ty Murray (89 points on Boomer Bob) and Ross Coleman (88.5 points on Slick Willy) nearly joined them.

“Not to take away from the time there was 11 90-point rides at the Finals or anything like that, but in my opinion, this is a new era of bulls, and you just don’t ride bulls like that very often. To ride eight of them in one night, it kind of speaks volumes about how great this pen is.”

Davis was one of four riders that threw their cowboy hats into the arena when Outlaw made a sensational ride aboard 2019 World Champion Bull contender Smooth Wreck to clinch Davis and Team Cooper Tires the team challenge victory with five riders still left to ride.

At that point, Outlaw was the sixth rider to reach the 90-point threshold.

Outlaw knew his team was depending on him, too.

The Hamburg, Arkansas, bull rider was also feeding off the energy of watching Divino, Kimzey, Cravens, Teel and Kolbaba light up the scoreboard before him.

“Whether they’d all bucked off, I’ve still got to do my job,” Outlaw said. “But to see my buddies and boys fired up like that and blow off the roof, shit, that just gets your (freaking) motor running, and that’s what we do it for. I mean, it wouldn’t be fun if one person rode.”

The Bismarck Event Center was already rocking at decibel levels never before heard in the PBR’s 18 previous trips to the North Dakota city when Outlaw was actually yelling at himself during his ride aboard Smooth Wreck.

“I was telling myself that. I never done that before. Never. It was just plain as day.”

The ride clinched Team Cooper Tires the victory as Davis, Outlaw and Kimzey combined to go 5-for-6.

“It’s just like anywhere else,” Kimzey said long before the team challenge became a 90-point ride showcase. “Bottom line, my team needed me today. I mean, that’s what it came down to. I had one job that could actually benefit the team. That’s stay on. So that’s all I was focused on.”

At the time, Kimzey was only the second rider to hit 90 points after Divino.

Never did he think the night would end the way it did.

“I’ve never been to a bull riding with more legit 90-plus bull rides,” Kimzey said after the event. “It was sweet. It’s not every day you freaking place 10th with a 90. It was awesome. It really was.”

Davis wound up bucking off Catfish John in 5.08 seconds on the final ride of the evening.

“After Chase rode Smooth Wreck, I couldn’t really keep my mind in one place,” Davis said. “I don’t know. You come so close so many times and then Chase puts the nail in the coffin there, and my emotions went wild.”

Each of the three riders took home $30,000 for the victory, while Outlaw added in an extra $12,500 for winning first place in the aggregate after also riding Sky Harbor Friday night.

However, the team competition in many ways became an afterthought as the riders became one collective unit singing a 90-point tune in rank unison.

It was heavy metal and Beethoven all in one.

Once the riders became aware of what they were doing, the teams all began cheering for each other.

The back of the chutes became a celebration of bull riding at its finest.

Minutes before Outlaw went 94.75 points, Kolbaba (Team Dakota Community Bank & Trust) was bringing the locker room to life with his own 93.75-point bomb on Biker Bob.

“It’s just everybody’s wanting to freaking ride and they are damn sure all on their game,” Kolbaba said. “And when you’re that set up with freaking rank bulls, you’re bound to get some big scores and that damn sure showed tonight.

“It’s crazy to be 93 and have however many freaking points and be second. This is something I’ll remember forever. For one, just being such a rank bull riding, and two, getting to watch a buddy make an even ranker bull ride.”

Berger’s head was still spinning when he finally sat down in a chair inside an office in the Bismarck Event Center.

He had finally had a chance to process what was going on after all of the riders, his partners and guests left.

“My gosh,” Berger said as he put his hands on his face. “I can’t believe what we saw tonight. I never expected this.

“In the 19 years we’ve done it here, we’ve had some great bull ridings, but tonight was undoubtedly one of the best bull ridings in the history of the sport,” Berger said. “I’m not going to say it was the best one ever, but I guarantee you what, it’ll range right in there somewhere.”

The energy in the venue reached a magical feel when Divino began the team challenge with a 90-point ride on Midnight Rain.

He set the standard and actually put Team Diamond Willow Construction ahead of Team Cooper Tires in the lead during the team challenge.

Divino finished second in the individual event average for a $7,500 check.

Team Diamond Willow Construction finished second overall (4-for-6, 360.75 points) as Leme capped the night with the eighth and final 90-point ride with his 91 on Rising Sun.

Leme credited Berger for letting the team captains select their matchups from a randomly assigned pen.

“I think it was a combo between the riders and the stock,” Leme said. “The riders put the right guys on the right bulls, and it’s what came out like that. That was great. I’ve never been to an event like this. It was a great event, great bull riders, the best bulls.”

“Oh, it’s amazing,” Lawrence said. “I hope we have it again next year. I hope Chad makes me another captain. I’m just happy my boys showed up and rode. I couldn’t ask for any more. This is right below the Global Cup, but it’s the same atmosphere.”

The mild mannered Teel of WSM Auctioneers may have put it best as he sat in the locker room looking at his fellow bull riders hugging, high-fiving, laughing and celebrating an unforgettable experience.

No one should be surprised, Teel explained.

This group is capable of something special, and for once they showed up like they all believe deep down they can.

“Honestly, I expected something special,” Teel said. “With the matchups, that was just… with those guys, it’s for sure. I’m expecting something like that to happen.

“But to actually witness that many good rides, it was pretty cool. I’m glad I was able to see them all. But I’m not surprised at all we put up big scores like that.”

Of course, in the coming days and weeks there will be chatter among fans, riders and legends of the sport as to where Saturday night in Bismarck ranks.

That is the joy of sports, and the benefit of the PBR now being amidst its 26th season.

PBR Director of Livestock and PBR co-founder Cody Lambert was sitting at home in Bowie, Texas, with his wife, LeAnne, and a group of friends watching the event on RidePass.

Like many at home that were unable to be in Bismarck in person, Lambert could sense and see something special unfolding in front of him on the television screen.

Davis (90.75 points on Midnight Rain), Divino (90.5 points on Speed Demon) and Kolbaba (90 points on Tested Crazy) were 90 or higher Friday night in Bismarck.

Bismarck gave Lambert a similar kind of excitement that he felt when he watched the Edmonton Global Cup online, but the riding in Bismarck was closer to those legendary nights in 1999 and 2001 for which he was in attendance.

Lambert is not going to say where Bismarck compares to the 1999 PBR World Finals or St. Louis in 2001 – that will take some time to think about – but he knows the bull riding world saw something rare on Saturday night.

“I’d have to go back and watch the videos before I say one was better than the other,” Lambert said around midnight. “We had a round on a Friday night in ’99 that was the best we’d ever seen up until that point, and tonight was one of those kind of nights. We had a short go in St. Louis one year that was memorable too.

“I watched the Global Cup in Edmonton online and it was as exciting as anything I’ve ever watched. But the riding part of it was the ’99 Finals or St. Louis or tonight was the very best.”

Berger agreed with Lambert that he would be hard-pressed to make a decision on how Bismarck compared to that night at the ’99 Finals, but Berger smiled with an idea.

“It’s in there,” Berger said. “I’m not going to be arrogant or whatever, but I’ll guarantee you one thing. Maybe we should roll the tapes, show all three of them and see which one was the best.”

One thing Lambert did point out late Saturday evening was that Bismarck was a stark reminder of why Berger is a reigning eight-time Stock Contractor of the Year.

Berger and his partners put together a bullpen that helped create one of the greatest nights in bull riding, regardless of where it may rank overall.

“So if there’s somebody out there that doesn’t realize how much Chad Berger has earned all of his recognition, then they ought to know it now.”