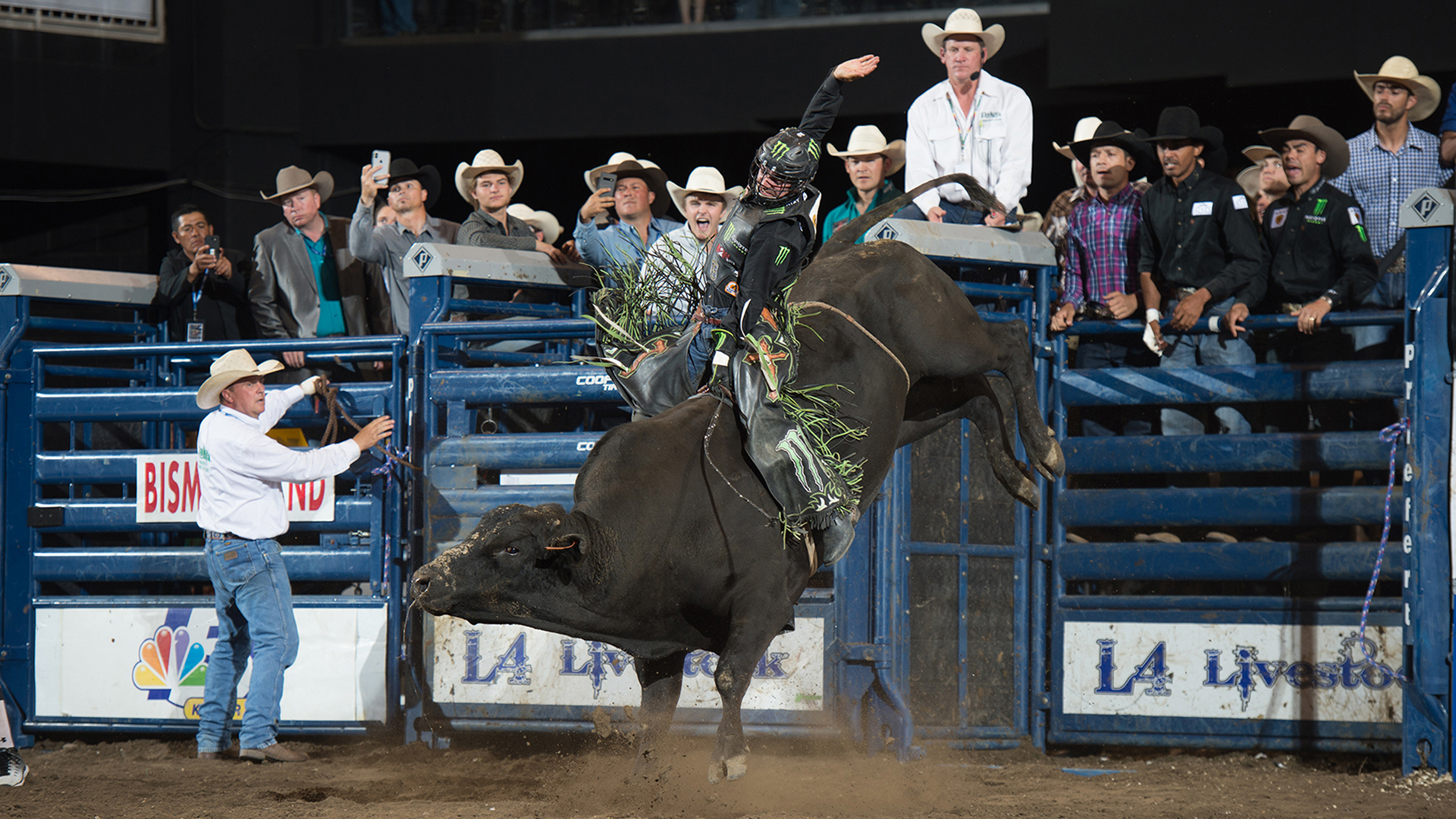 Relive the excitement from Bismarck exclusively on RidePass on-demand!

He would not expect anything less, and he is not concerned.

If anything, an exciting weekend at the Bismarck Event Center has the world No. 1 bull rider even more fired up and focused.

The 22-year-old capped off a magical night of bull riding in Chad Berger’s $125,000 team challenge by riding Rising Sun for 91 points.

“I’m very happy to be another 90,” Leme said with the help of Paulo Crimber translating. “That was the first time I got the opportunity to get this bull, and he kind of surprised me. He bucked a little bit more than I thought he was going to buck, and that was just great. I’m just very happy to have another 90 points under my belt.”

Leme leads the PBR with eight 90-point rides on the premier series, and he has 11 at all levels of competition when you include Berger’s team exhibition.

Even the 2017 PBR World Finals event winner, though, had to pause to find the right words to describe what he was a part of and witnessed on Saturday night.

The exhibition team challenge saw a total of eight 90-point rides by some of the best bull riders in the world.

If you take a closer look at it all, this weekend may just be a Magic 8 ball sneak peek into what the 2019 PBR World Finals in Las Vegas may look like in less than five months.

Every single one came through with a statement ride or put together an otherwise impressive weekend.

The world No. 1 bull rider is well aware of how strong this year’s crop of World Champion contenders is.

Therefore, he was not surprised as he started to watch rider after rider hit 90-point dingers or go 2-for-2 in the preceding Touring Pro Division event.

“It’s what I expected, for the race to be like this, because every year, this time of year, all the American boys start to get a little extra gas,” Leme said with the help of Paulo Crimber translating. “I was expecting those guys to be rank this time.

Bismarck was the kind of showing from the world’s best bull riders that has bull riding fans and experts already thinking about Nov. 6-10 inside T-Mobile Arena in Las Vegas.

2017 World Champion Jess Lockwood was the big winner in regards to the actual world title race in Bismarck.

Lockwood, who also rode Catfish John for 89.25 points in Friday night’s team exhibition, is now the No. 3-ranked bull rider in the world and a mere 389.16 points behind Leme.

Meanwhile, the man Lockwood leapfrogged in the world standings had arguably one of the best weekends of anyone.

No. 4 Chase Outlaw made the highlight ride in Bismarck by absolutely crushing a 94.75-point ride aboard 2019 World Champion Bull contender Smooth Wreck. That ride came 24 hours after Outlaw’s 89.25-point effort on Sky Harbor in the team challenge.

Outlaw also went 1-for-2 in the TPD event, picking up an 87-point effort on Jungle Can Do and nearly riding Chief Petty Officer (7.21 seconds).

Teel became the sixth rider to ever ride Speed Demon, avenging two prior buckoffs with a 90.25-point effort.

“Kind of a statement ride, especially on Speed Demon,” Teel said. “He’s bucked me off twice before. We still had an outside shot at that (win) I guess, but it was pride, to get him rode and proving myself, because I knew I could get by him. I’m glad it worked out. Hopefully if I meet him again whenever points are on the line, I’ll be able to take advantage of that bit of experience.”

Teel’s ride came only 30 minutes or so after he finished the TPD event with an 88.5-point ride on Red Bandana. Teel also rode Stretch in the team challenge Friday night for 89.25 points.

2016 World Champion Cooper Davis’ only blemish was the most surprising.

Davis was a perfect 3-for-3 in Bismarck with rides on Hitman (88 points), Midnight Rain (90.75 points) and Get Shorty (89.5 points) before Catfish John took him down in 5.08 seconds on the final out Saturday.

Davis finished one point behind Lockwood for the TPD Major win, and his second-place finish netted him 127.5 points toward the world standings.

The 25-year-old has now ridden six of his last seven bulls dating back to his victory in Green Bay two weeks ago.

Davis said you could tell as the night went on that each rider began to thrive off the others’ energy and success.

“Every guy that was entered tonight, every guy that stayed on, not just my team, they dang sure had their hammers cocked and they came here to win,” Davis said. “Outlaw was just the icing on top though.”

RELATED: Two-time World Champion J.B. Mauney tips his hat to the efforts of his peers

PBR Director of Livestock and PBR co-founder Cody Lambert followed the action on RidePass from his ranch in Bowie, Texas, and he said the PBR’s Top 5 or 6 bull riders can match up alongside some of the best to ever nod their heads in the game.

“If you listen to what (in-arena announcer) Brandon Bates was hitting on pretty good tonight, these five or six guys that are the top ones in the standings are as good as any five or six guys in the history of the sport,” Lambert said. “Jose and Jess and Derek, and maybe Chase, haven’t reached their prime yet. Those guys have got a shot to be the best there’s ever been.

Kolbaba could have been 94-95 points on Smooth Wreck Friday night in the team challenge before bucking off at 7.96 seconds.

It was still a strong overall weekend for the No. 8 bull rider in the world standings, though. Kolbaba won Round 1 of the TPD event with a 90-point ride on Tested Crazy and then conquered Biker Bob for 93.75 points Saturday night in the team challenge, only to be shown up by Outlaw minutes later.

“This is something that you dream of,” Kolbaba said. “This whole bull riding, it’s been awesome. Every time that latch opens, you’re damn sure going to want to be watching, because them guys are riding outstanding, the bulls are bucking and it’s damn cool to be a part of it.”

Castro (0-for-2) and Dirteater (0-for-1) did not have any success in the team challenge, but they both finished the TPD event a perfect 2-for-2.

All of this is without including reigning five-time PRCA champion Sage Kimzey’s performance in the team challenge. Kimzey posted 90 points on Gambini and 87.75 points on Rising Sun in Bismarck.

“You throw Sage Kimzey in there, and he’s right there with them,” Lambert added. “And you’ve got Cody Teel and Joe Frost. You’ve got all of those guys. Not even to mention (Matt) Triplett wasn’t even in (the team format). Dirteater didn’t ride in (the team format) tonight. Stetson (Lawrence) held his own.

“There’s not as many great bull riders as I’d like to see at one time, but the top end is really strong.”

Leme is welcoming the challenge, just as he did last year when 2018 World Champion Kaique Pacheco refused to give up after tearing ligaments in his left knee four days before the 2018 PBR World Finals.

In fact, every time Leme sees his challengers succeed, that motivates him to push that much harder in the arena.

He is going to remember that every day through the World Finals come November.

Leme expects the title race to remain fierce until then.

“Seeing them riding this great, I just kind of pushed myself to continue to ride good, and not sit on my butt and say ‘I got it,’ because I don’t,” Leme said. “Today I’m No. 1, but next week I could be No. 2. That kind of forces me to work myself through and just keep working harder to continue to ride and maintain my position at No. 1.”