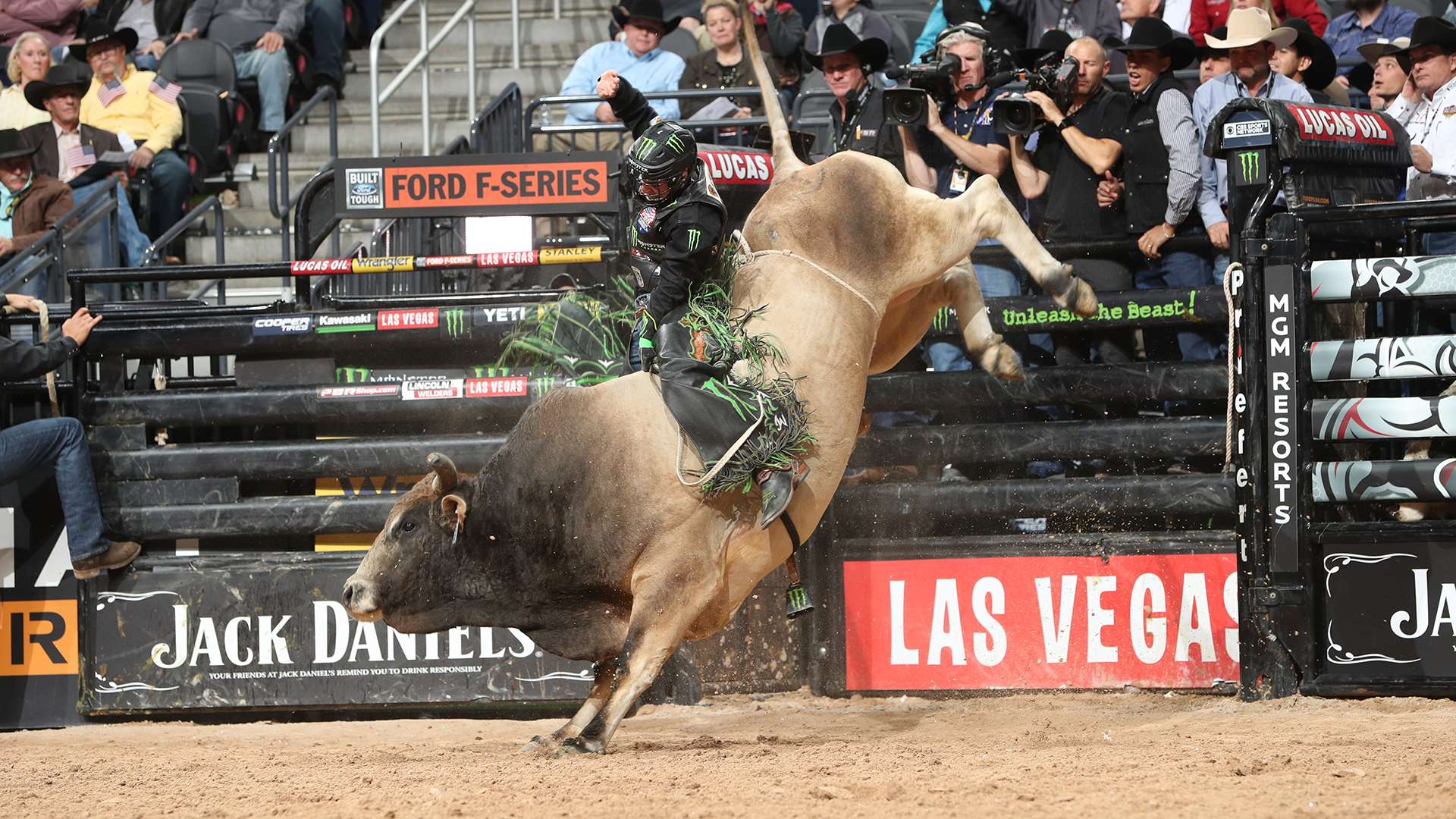 For the last three decades, Frost has continued to serve as an inspiration to future generations of bull riders as his legacy lives on through family and friends who knew him, those who have seen the movie 8 Seconds or others who have gone on to read about him or watch highlights of his career.

One of the most iconic chapters of Frost’s career came in 1988 during the “Challenge of the Champions.” Frost and fellow 1987 World Champion Red Rock went head-to-head seven times in the famous showdown.

Frost had come up short of the 8-second mark in two previous matchups against Red Rock at the National Finals Rodeo, including in 1986 when Red Rock prevented him from riding all of his bulls and winning the world title.

In 1987, both Frost and Red Rock went on to win world championships in the PRCA, and the following season led to Red Rock owner John Growney and Frost teaming up to create what would become the most memorable series between man vs. beast.

The two champions faced off seven times in a three-month period between April and July in 1988.

The “Challenge of the Champions” brought tremendous popularity and national attention to the sport of rodeo and bull riding with national media outlets such as Sports Illustrated, USA Today and NBC’s Sports Machine all profiling the man vs. beast phenomenon.

RELATED: Mauney is a student of Lane Frost’s game

Mauney and Bushwacker faced off 13 times at all levels of competition throughout the two legends’ careers, with Mauney reaching the 8-second mark one time (95.25 points in Tulsa, Oklahoma).

What would a modern “Challenge of Champions” look like today?

PBR.com checked in with various riders at Last Cowboy Standing to see which rider and which bull they would like to see go head-to-head for a best-of-seven series if another “Challenge of Champions” were to ever come about.

The consensus among the Top 35 is that they are gaining interest in seeing which rider can conquer D&H Cattle Company’s Heartbreak Kid.

The majority of riders was unsure of which bull is the rankest going currently, but most agree that they want to see someone end the 6-year-old’s streak of 34 consecutive buckoffs on the premier series and 54 overall.

The other consensus, to no surprise, is that almost every rider said they would select SweetPro’s Bruiser for their own best-of-seven series.

Heartbreak Kid has begun to gain notoriety inside the Unleash The Beast locker room for his perfect record.

Heartbreak Kid is 62-1 at all levels of competition with Luciano de Castro turning down a re-ride option after he rode the bull two years ago in Denver at a Velocity Tour event for 75 points.

The D&H Cattle Company bovine only averages 43.91 points per buckoff, but this season he has raised that average to 44.13 points.

“Man, he really just bucked hard,” Davis said. “There wasn’t any tricks. He maybe set me up a little around the corner, and I was just late and tried to cut him off but he bucks hard to be able to cut him off.”

Davis was one of four riders who were named more than once by his peers wanting to see him take on Heartbreak Kid.

Heartbreak Kid was marked a career-high 46 points last year during the championship round of the World Finals when he bucked Outlaw off in 3.67 seconds. The buckoff cost Outlaw a chance at winning his first PBR World Finals event title.

Lockwood has lasted the longest aboard Heartbreak Kid at 6.7 seconds this season in Sacramento, California, and was also bucked off at the 2018 Days of ’47 in 6.4 seconds last year.

Meanwhile, Leme called Heartbreak Kid one of the rankest bulls he has been on after being blasted in 1.69 seconds in Billings and 3.32 seconds last year in the Tulsa, Oklahoma, 15/15 Bucking Battle.

The world No. 1 bull rider is as fearless as they come and would by no means be scared of the mean, big-horned bovine athlete known as Legit.

What also makes this matchup intriguing is the fact that so far Legit is 3-0 against Outlaw, which certainly has the 27-year-old geared up for a rematch.

Legit first bested Outlaw in Glendale, Arizona, in 6.02 seconds during the 15/15 Bucking Battle before bucking Outlaw off at RFD-TV’s THE AMERICAN to prevent him from trying to win a share of $1 million. Outlaw then was sent flying in Tacoma, Washington, in 2.48 seconds.

Legit has only been ridden once in his career in 17 attempts at all levels of competition. So far Jess Lockwood is the only rider to have found success, doing so for 89.5 points at the Ty Murray Invitational in May.

2018 PBR Australia champion Aaron Kleier also nearly rode Legit just last week at Last Cowboy Standing at Cheyenne Frontier Days before he was ruled to have slapped the bull at 7.97 seconds. Fellow rookie Lucas Divino also almost knocked a ride out of the park aboard Legit before being jerked down at 7.55 seconds and breaking his collarbone.

These two legends have already paired up three times with every match going Mauney’s way – on the scoreboard at least.

However, Bruiser made Mauney pay with a broken jaw in 2014 and a sprained left sternoclavicular joint in 2015.

They last met two years ago in Billings, Montana, where Mauney rode Bruiser for 94.25 points.

Still, many said they would like to see the legendary Bruiser and Mauney go head-to-head seven times.

The problem with this series is that both Mauney and Bruiser are in the twilight years of their careers instead of their primes. A J.B. Mauney in his prime vs. a young Bruiser could arguably push for the PBR record for high-marked ride (96.5 points).

Bruiser has had three extremely strong outs against Lockwood.

The two first faced off in Decatur, Texas, at J.W. Hart’s Touring Pro Division event in 2016 when he had a Young Guns Challenge. Bruiser won that meeting in 6.57 seconds in 46.5 points.

The most memorable matchup – or maybe one that Lockwood rather not re-live – came when Bruiser knocked Lockwood out during the 15/15 Bucking Battle in Springfield, Missouri, in 6.06 seconds two years ago for a 47.25-point bull score, which is the second-best score of his premier series career.

Lockwood would return to action the following week to earn the win in Austin, Texas, propelling himself toward the 2017 World Championship.

Bruiser would buck Lockwood off again last season in Little Rock, Arkansas, in 4.89 seconds and earn a 46.5-point bull score.

Some consider Davis’ 93.5-point ride on Smooth Operator in Atlantic City, New Jersey, last season as the best bull ride they have ever seen.

Davis and the Chad Berger bovine athlete have become great dancing partners since Smooth Operator played a major role in Davis coming up short of winning back-to-back World Championships. It was at the 2017 World Finals when Davis bucked off in 4.92 seconds when Smooth Operator had a trashy out for a 34.75-point bull score.

Davis then went on for that sensational 93.5-point ride last year with Smooth Operator coming out of the right-handed delivery. The Jasper, Texas, then nearly made another marquee ride at the 2018 World Finals before coming down in 7.74 seconds with Smooth Operator being marked 46.5 points.

Smooth Operator bucked off Davis earlier this year in 2.75 seconds in Kansas City, Missouri, for a 45.75-point score.

Smooth Wreck is the only bull ranked in the Top 10 of the YETI World Champion Bull race that has faced an active rider seven times.

The No. 1 bull in the world has developed quite the rivalry with Derek Kolbaba during those seven meetings.

Smooth Wreck owns a 5-2 record against Kolbaba, including three buckoffs in 2019.

The first of those three buckoffs came in 5.17 seconds at the 2019 WinStar World Casino and Resort Global Cup, presented by Monster Energy, and the last was at Chad Berger’s $125,000 Team Challenge when Kolbaba was on his way to a 90-point score before coming down at 7.96 seconds.

Kolbaba has ridden Smooth Wreck for 91.75 points at the 2018 PBR World Finals and 83.5 points last season in Kansas City.

Bad Touch is right on the heels of Heartbreak Kid with 32 consecutive buckoffs on the premier series, and 48 overall, but he does not have the same notoriety. The 9-year-old bull also has been inconsistent at times and averages only 42.26 points per out.

Regardless, no rider, including six PBR and PRCA champions nine times, have been able to reach the 8-second mark on him.

Bad Touch recently bucked Kolbaba off in 2.31 seconds at the WCRA Titletown Stampede in Green Bay, Wisconsin, in June.

Ryan Dirteater nearly became the first rider to reach the 8 seconds in Columbus, Ohio, this past April before he was called for a slap at 7.7 seconds.

How would the 2016 PBR World Finals event winner fare over the course of seven meetings against Bad Touch?