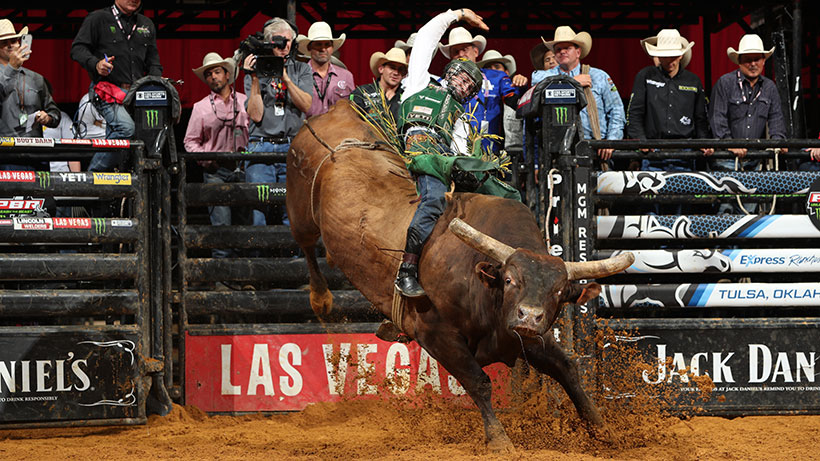 HOUSTON – Saturday night will mark the eighth 15/15 Bucking Battle of the season.

The 15/15 Bucking Battles offer the Top 15 bull riders in the world the opportunity to compete for extra money and additional points toward the world standings on CBS national television throughout the season.

The 150 points that a winner earns can go a long way towards winning a PBR World Championship.

In comparison, runner-up Jose Vitor Leme earned only 210 points. That right there was a 390-point difference. Leme lost out on the world title by 422.5 points.

With the current Top 3 in the world standings separated by less than 164 points, every world point becomes crucial as the stretch run to the World Finals begins to pick up steam with the summer coming to a close.

The 15/15 Bucking Battle is a great test of a rider’s skillset, as the round features some of the rankest bulls in the world being paired up randomly with a rider. Therefore, riders cannot draft themselves an ideal matchup as they could for a championship round.

The world leader is also the third rider all-time, joining Cooper Davis (two times) and Joao Ricardo Vieira, to win an event and 15/15 Bucking Battle on the same weekend.

The 21-year-old has been sensational this season in 15/15 Bucking Battles and is a PBR-best 4-for-5 in the bonus round of competition.

Lockwood has earned 397.5 points toward the world standings in the 15/15 Bucking Battles alone this season, which is more than one round win at the 2019 PBR World Finals.

Much has been made about Lockwood’s event win in Tulsa back in 2017 spearheading his push for the ’17 championship.

However, it was also in Tulsa two years ago where Lockwood rode Seven Dust for 87.5 points in the 15/15 Bucking Battle for one of the first “rank” rides of his career.

The now 23-year-old – Leme celebrated his birthday on Thursday – has already earned more world points in the 15/15 Bucking Battles this year (390) than he did last season (210) and has vocally stated the importance of converting on 15/15 opportunities.

Leme is still not completely polished riding bulls away from his hand, but he continues to make up for any small deficiency by being dominant into his hand and relying on his athleticism.

The 35-year-old is only 1-for-5 in 2019 Bucking Battles, but he is historically one of the PBR’s best. Vieira  leads the PBR all-time with 16 rides in 15/15 Bucking Battle competition, which is remarkable considering how Vieira has struggled the majority of his career riding bulls away from his hand.

This weekend will be Vieira’s 47th career 15/15 Bucking Battle.

One of the only blemishes on Outlaw’s stellar 2019 season has been his record in the 15/15 Bucking Battle. Outlaw had bucked off all six of his 15/15 opponents this year until riding Bottoms Up for 88.5 points in Tulsa last weekend.

Outlaw has overcome his 1-for-7 showing in the 15/15 Bucking Battles with three impressive event victories (Kansas City, Missouri; St. Louis; and Cheyenne, Wyoming) and overall consistency. He leads the PBR with 32 qualified rides on the Unleash The Beast.

The 27-year-old does have three career 15/15 Bucking Battle victories. Like Leme, when Outlaw connects for a ride, it usually results in a victory or Top-3 finish.

Teel has had relatively good success in the 15/15s, but he is not the flashiest rider in the locker room, which sometimes hurts him when it comes time for the bonus round.

The 2012 PRCA champion has relied on consistency rather than high scores throughout his career, but he is still averaging a respectable 87.25 points per ride in the 15/15 Bucking Battle.

Teel did post back-to-back 90-point rides at the 2018 PBR World Finals, and he has the ability to use his arm length to his advantage against some of the larger bulls on tour.

We will see how he does this weekend against Heartbreak Kid (34-0, UTB).

The 2016 World Champion has been hit or miss in 15/15s. Davis does have three victories, but he is also riding below 25% in the bonus round of competition and has bucked off 13 consecutive bulls.

In fact, Davis (0-for-3) is one of three riders in this weekend’s 15/15 Bucking Battle that have failed to record at least one ride in the bonus round this season. The other two are rookies Lucas Divino and Ezekiel Mitchell.

This one may be a surprise to some, but Triplett has quite a good record in 15/15 Bucking Battles.

Triplett has 38.89% riding percentage, averages 88.5 points per ride and has two victories and four runner-up finishes. He has finished either in first or second place in six of his seven rides.

The Columbia Falls, Montana, bull rider has not won a 15/15 Bucking Battle since September 26, 2015, in Allentown, Pennsylvania.

Triplett did have a nagging wrist injury earlier this season on his riding hand, but he is now healthy and could make a push into the Top 5 of the world standings once again.

If not for his torn groin in the spring, Jesus may still be on top of the Rookie of the Year standings. Health has been Jesus’ biggest limitation in his first full season in the PBR, but the rookie’s small sample size in 15/15 Bucking Battles is a good sign that there is more to come.

The 21-year-old leads all rookies with three rides in four 15/15 Bucking Battles.

Just last week he rode SweetPro’s Bruiser for 90.5 points, and prior to that he won the Oklahoma City 15/15 Bucking Battle with a 91.5-point ride on Cochise.

Just missed: Daylon Swearingen. The 20-year-old made a huge 92-point ride on Cochise last weekend to split the 15/15 Bucking Battle with Lockwood in his first 15/15 Bucking Battle appearance. The ride may just spearhead Swearingen’s 2019 push for Rookie of the Year and a Top-10 finish in the world standings.