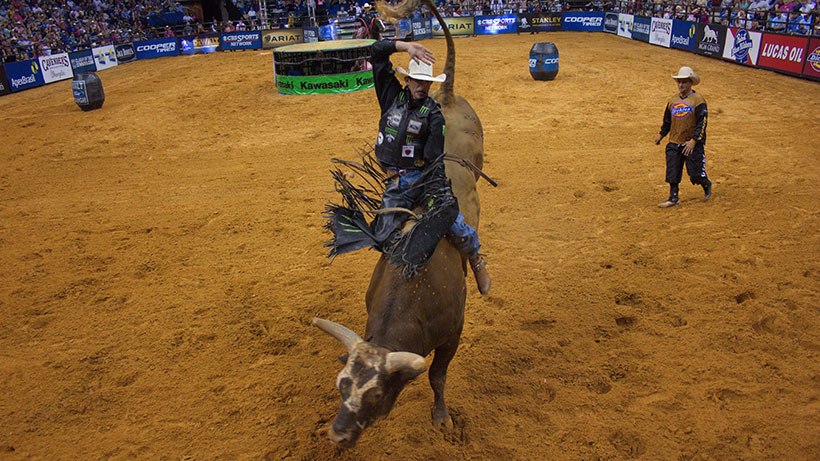 Since making his PBR debut in 2006, Mauney has notched 74 90-point rides – he’s No. 2 in that category as well, tied with two-time World Champion Justin McBride – and boasts some of the most memorable rides in PBR history.

Take a ride down memory lane and relive the best 11 rides of Mauney’s 526.

Not only was Mauney’s ride on Bushwacker his highest-scored ride ever at a whopping 95.25 points, it made history in that it broke the three-time World Champion Bull’s unridden streak at 42 consecutive buckoffs. It also began Mauney’s historic second-half comeback, in which he overcame a 3,056-point deficit to claim his first world title.

Prior to his victory at the Bad Boy Mowdown in Little Rock, Arkansas, in 2019, Mauney’s last Unleash The Beast win came in Billings, Montana, in 2017. He rode eventual World Champion Bull SweetPro’s Bruiser for 94.25 points in the championship round to win the event and vault to No. 3 in the world standings.

Mauney rode Pearl Harbor for 94.25 points en route to the 15/15 Bucking Battle win in Sioux Falls, South Dakota, in 2016. Mauney is one of just six riders ever to make the 8 seconds aboard Pearl Harbor in the bull's 61 career outs.

Mauney went 5-for-6 at the 2014 PBR World Finals to finish second to three-time World Champion Silvano Alves. Mauney’s final ride was a 94-point trip aboard Percolator to win the championship round.

Mauney won his first world title in 2013 on the back of an incredible comeback in the second half of the season and a 6-for-6 performance at the World Finals. While four of those rides were north of 90 points, the highest came in Round 2 when he rode Smackdown for 93.75 points. In his career, Mauney was 4-for-6 against Smackdown for an average score of 91.5 points.

Mauney finished No. 2 in the world standings for the second consecutive year in 2009, going 7-for-8 at the World Finals. His last ride was a 93.75-point trip aboard Black Pearl to win the 2009 World Finals event title.

Two of the top-scored rides of Mauney’s career came at the 2008 World Finals, when he was en route to a third-place finish at the event and a No. 2 rank in the world standings. One of them came in Round 4, when he rode Crosswired for 93.75 points.

In 2012, Asteroid was on his was to his first and only World Champion Bull title when he came up against Mauney in San Antonio, Texas. Mauney gritted out a 93.5-point ride that he counts as one of his favorites ever.

“He had so much whip and kick, and you never really knew which way he was going to go,” Mauney told PBR.com in 2015. “I was holding onto the tail for the last couple of rounds. I wasn’t turning loose. I didn’t know if I made it or not when I hit the ground.”

Mauney became just the third cowboy ever to ride Voodoo Child when he made the 8 seconds in Greenville, South Carolina, earning 93.5 points. Voodoo Child would go on to be ridden just five times in 54 premier series outs.

The second ride to make this list from the 2008 World Finals, Mauney rode Troubadour for 93.5 points in Round 2 on his way to a 6-for-8 performance.