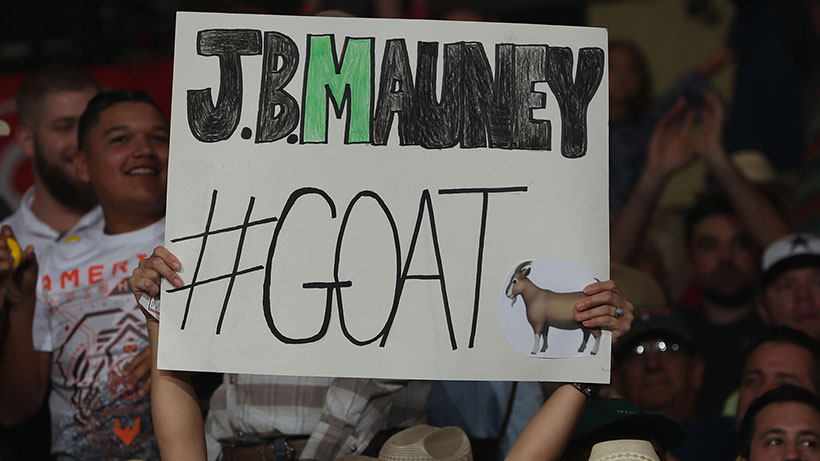 Jess Lockwood earned an event win (and no, this is not an old draft from last week), but two of the PBR’s G.O.A.T.s stole the show as J.B. Mauney and Silvano Alves notched some pretty significant rides. Miss a moment of the action this weekend? Here’s what happened around the PBR.

Another weekend, another Unleash The Beast event, another Jess Lockwood event victory, this time in Houston.

It was a history-making weekend for J.B. Mauney, as the two-time World Champion moved into sole possession of second place in all-time career rides with No. 526.

Missed a few of Mauney’s 526 career rides? Here are his 11 highest-scoring outs.

Lockwood’s win means he’s back in the world No. 1 ranking after briefly losing it to Chase Outlaw, who reclaimed it after his 15/15 Bucking Battle win.

Young gun Daylon Swearingen – another name you should be getting used to seeing – won Round 1 in Houston and took over the lead in the Rookie of the Year race.

Heartbreak Kid continued his streak of dominance, bucking off Cody Teel for his 35th consecutive buckoff and moving into a tie for the second-longest streak in PBR history.

Cooper Davis won the championship round and placed second overall at his home event in Houston, but the 2016 World Champion isn’t satisfied.

Down Under in PBR Australia…

Check out the best photos from day one and day two in Houston.

A happy update from Ryan Dirteater.

Just a few friends, and family that came to see me. Sorry if I missed some, but I’m thankful for all the prayers, and messages I been getting. I want everyone to know that I’m back in Hulbert, and in the healing process. I’ll keep you all updated on my progress. Thanks 🙏

And a happy update from Michael Lane!

We welcomed Allie-Michael Lane to the world this evening 9lb 20 inches and its a day that will never be forgotten! So proud of my wife @brookparduelane!

North of the border, the PBR Canada Touring Pro Division will be in Coronation, Alberta, for the Coronation Royal Rumbull PBR on Aug. 21.

The Touring Pro Division heads to Eureka, Montana, for The Bull Thing on Aug. 24.