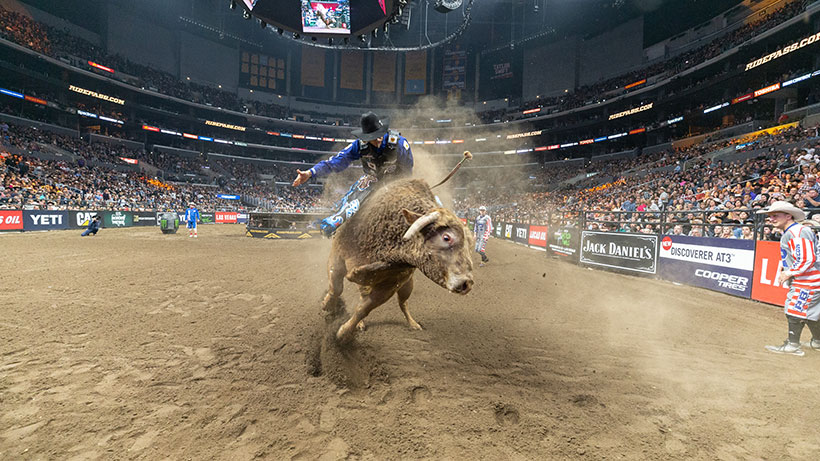 PUEBLO, Colo. – Gene Owen would have loved for Chase Outlaw to ride Cochise for 90 or more points at the last PBR Major during Last Cowboy Standing at Cheyenne Frontier Days.

In fact, Owen takes tremendous pride in seeing a bull rider hit a tremendous 90-point ride on one of his and Jane Clark’s bulls.

Daylon Swearingen most recently rode Cochise for 92 points two weeks ago during the 15/15 Bucking Battle in Tulsa, Oklahoma.

The ride was a personal best for Swearingen, and the first 90-point ride of the 20-year-old’s career will be one he never forgets.

During Last Cowboy Standing, Owen talked about his desire to see Cochise set a new PBR record for 90-point rides produced by one bull.

Cripple Creek Promiseland was ridden for 90 or more points nine times in 2001.

“For a bull to go through a whole year and never be under 90 is quite the deal,” Owen said. “If they went to five events that would be no big deal, but to go to 15, it is a big deal. To stay that good for that long.”

RELATED: Round 1 matchups for Nashville

Cochise has been to 11 events in 2019 and been ridden for 90 or more points seven times – three of those rides were for 92 points or more.

There is a good chance that Cochise will be conquered again for 90 or more points during this weekend’s Jack Daniel’s Music City Knockout, presented by Cooper Tires, in Nashville.

One rider can earn a maximum of 1,250 points toward the world standings in Nashville and a minimum payday of $100,000.

Instead, it will feature the same progressive elimination format that debuted in Cheyenne four weeks ago.

Cochise and Bruiser were the final two bulls in Cheyenne, but Outlaw and Lucas Divino (5.08 seconds on Bruiser) both failed to connect on a winning ride.

Ruger Piva rode Bruiser for 92 points at the PRCA Caldwell (Idaho) Night Rodeo last weekend in the bull’s last out at all levels of competition. The ride was a new PRCA career best for Piva.

“He feels amazing,” Piva said. “Just feels like you’re floating through the air, really! You definitely know he’s bucking his ass off, but he just feels really smooth.”

This weekend is Piva’s first Unleash The Beast event since Cheyenne, when he was eliminated in the first round.

Radford and West are making their UTB season debuts courtesy of injury exemptions from 2018, while Marks is making his career debut on the PBR’s marquee tour.

Radford is 10-for-20 (50 percent) since returning to competition on July 4 following offseason left knee surgery. The 24-year-old finished 2018 ranked 39th in the world standings and went 0-for-3 at the World Finals as an alternate.

West has struggled (7-for-32, 21.88%) since returning in April after breaking his leg at the 2019 WinStar World Casino and Resort Global Cup USA, presented by Monster Energy, in February.

Fellow Canadian Dakota Buttar (hip/shoulder) is returning to competition after missing the past two UTB events and sitting out the last two weeks overall. Buttar won the last two PBR Canada events he competed in to help him stay ranked inside the Top 35. He heads into Nashville ranked No. 31, 167.09 points ahead of No. 37 Dalton Kasel.

Frost was on his way back home to Utah Wednesday after undergoing surgery Monday in Houston. According to Dr. Tandy Freeman, Frost is questionable for the 2019 PBR World Finals.

“Right now, I need to get home and get it elevated and rest for a few days to let it quiet down and begin to heal, then worry about rehabbing it,” Frost said. “I’m in a walking boot and already able to put some weight on it. Should be on the stationary bike first of next week.”

Finally out of the hospital! Had surgery last night and now back home for awhile to heal it up. Thank you to everyone for the help and support. And although it wasn’t even close to how we wanted to celebrate @kyleejofrost and I got to be together on our two year wedding anniversary.

World leader Jess Lockwood may be able to extend his lead atop the world standings this weekend in a big way.

Lockwood has a rematch in Round 1 to start things off against The Don (27-5, UTB) as he tries to increase his 340-point lead on No. 2 Chase Outlaw.

The 21-year-old previously covered The Don for 87.5 points last year at the WCRA Rodeo Showdown at Helldorado Days.

SMASHVILLE: WORLD CHAMPION BUCKING BULLS TO BRING THE HEAT IN ROUND 2

Eight of the Top 10 World Champion Bull contenders are all expected to buck in Nashville.